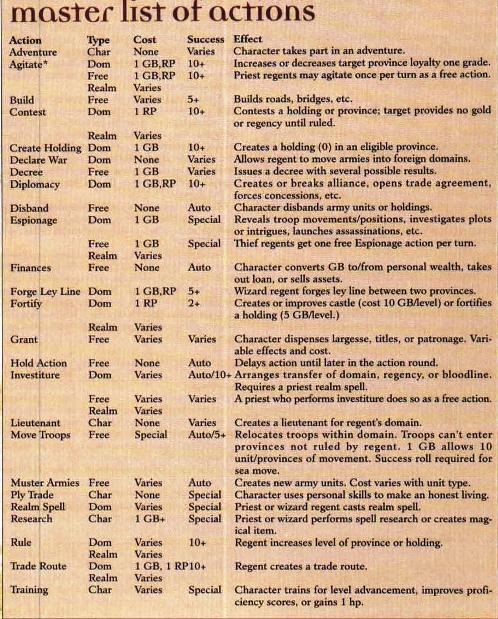 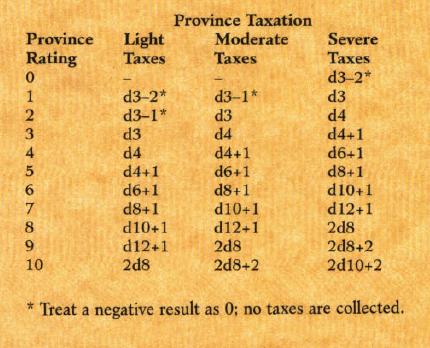 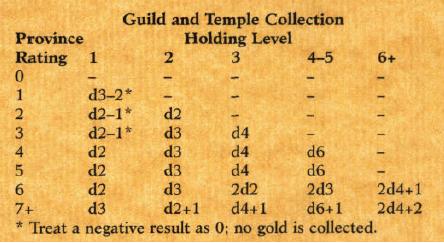 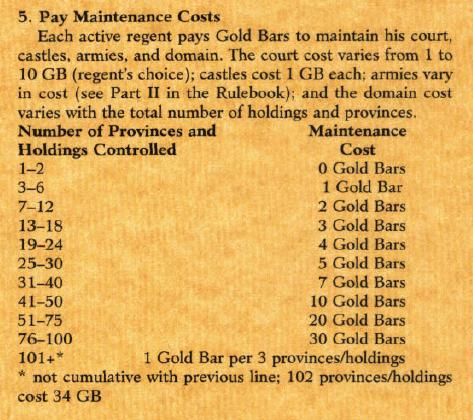 The loyalty of a province affects the ability of the ruler to collect taxes and perform realm actions in that area. Loylaty is rated in four grades: high, average, poor, and rebellious. Loyalty has no effect until it drops to poor; at that point the Regency Point and Gold Bar cost of all actions in that province increase by one each. If the province turns rebellious it does not generate any RP or GB and all costs in that province are doubled.

At the end of the domain turn, the loyalty of each province is adjusted as follows:

Spoiler:
Law Holdings and Loyalty
A regent who holds their lands in an iron grip can tolerate some discontent. Law holdings control changes in loyalty as follows:

Effects of Military Units
Each unit of troops in a province counts as one law holding for the purposes of loyalty and taxation.

Trade routes
Trade routes generate income for a guild domain through trading
various commodities between different geographical areas.
In order to accommodate trade, a route must exist for overland
or oversea trade. Trade routes can only be forged between two
provinces if the provinces provide different trade commodities.
In game terms, the provinces must either be of different
terrain types (plains and hills, mountain and swamp, etc.) or of
different races or cultures (Anuirean and Rjurik, Vos and Khinasi,
etc.) Furthermore, a province has a limited amount of
goods available for export and a limited demand for imports.
A trade route must originate in a province in which a regent
has a guild holding; it must terminate in a province in which
the regent has a second guild holding or in which a guild holding
exists with whom a trade agreement (along with a share of
the profit) has been arranged, generally through a diplomacy
action. The number of trade routes in which a single guild
holding can be involved is limited by the holding's level. A
level 0 holding cannot be involved in a trade route. A guild
holding level 1-3 can support one trade route. A guild holding
level 4-6 can hold two trade routes. A guild holding level 7+
can hold 3 trade routes.
Once created, the regent's of the guild holdings on either
end holds the trade route equally. Either regent can destroy the
trade route at will. Trade routes generate seasonal GB income
for each guild equal to 1/2 of each guild's level. It is not unusual
for other regents involved (the province ruler that maintains
the roads, etc.) to receive a regular tribute (often 0.5 GB
per traderoute) from the guild regent's at either end of the trade
route – but such matters are negotiable.
For example, an overland traderoute is forged between a
guild (4) and a guild (2). The owner of the guild (4) earns an
additional 2 GB per domain turn. The owner of the guild (2)
earns an additional 1 GB per domain turn. Trade routes do not
generate regency points.
There are two basic types of trade routes: overland trade
routes and sea trade routes. Both type of trade routes are considered
equivalent for the purposes of determining the maximum
number of trade routes per holding. For example, consider
a sea trade route forged between a guild (6) in Illien (forest)
and a guild (3) in Aerele (plains). The guild (3) is involved
in one trade route (its maximum) and cannot be involved
in any new trade routes. The guild (6) in has one free
trade route remaining (it has a maximum of two); this additional
trade route can be either an overland trade route or a sea
trade route.
Overland


Spoiler:
Overland trade routes transport valuable commodities between
two provinces by caravan, wagon, and cart. A wellmaintained
system of roadways must exist between the two
provinces to allow overland trade. The initial province, the
final province, and a path of adjacent provinces that connect
them must all have highways (a construction domain asset).
All major rivers between provinces must have bridges. If no
highway exists between the two provinces at any time (due to
a failure to maintain highways, a closing of borders due to
war, etc.) then the trade route is destroyed.


Spoiler:
Sea trade routes transport valuable commodities between
two provinces by ocean-going vessel. Both provinces must be
coastal provinces with a seaport (a construction domain asset).
Furthermore, a number of naval vessels must be dedicated to
servicing the trade route each domain turn. Naval vessels are
discussed in Chapter Six: Armies and Warfare. If the cargo
capacity of the vessels dedicated to shipping trade does not
meet or exceed the trade route level, then the income generated
by the trade route is reduced appropriately. Sea trade
routes have the option of connecting to "parts unknown" instead
of connecting to a specific coastal province. In this case,
the sea trade route's level is one-half of the initial province's
level. Only one trade route per province may connect to parts
unknown.

Re: akcije i collect tablice

Re: akcije i collect tablice